Stuart Jardine is another Olympian who's been attracted to the Moth class! Bet by a friend that he couldn't sail a foiling Moth, Stuart duly took to the skies on Friday, sailing Pete Bartons Mach2. 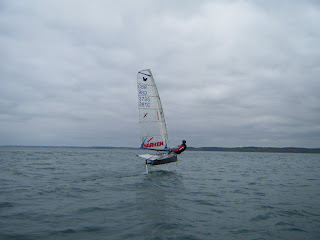 These days we are kind of used to having Olympics sailors competing in the Moth class, and of course it makes us very proud, but it is not uncommon.

I have to say though that Stuart's case as the latest Olympian to sail a Moth is quite incomparable, and that's largely because we have to go back in time a bit.

You see at the age of 35 Stuart represented Great Britain in the Star class at the Mexico City Olympics and then again in Munich four years later. That's 1968 and 1972. The more numerate of you will have immediately calculated that this makes Stuart 78 years old.

So its been a while since Stuart has sailed a dinghy and its been 20 years since he last capsized! However proving that once again form is temporary and class is permanent, Stuart duly delivered! 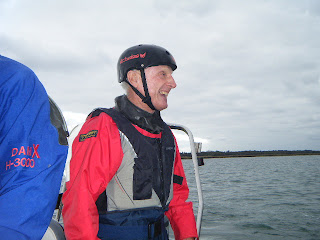 Stuart said; “I think it might of been a bit easier if I had done some dinghy racing in the past few years and probably 60 years earlier! My stomach muscles and arms were like jelly after a few big splashes. Then relearning the technique of heeling to windward rather than the other way in keel boats will take a bit of practice. The most noticeable sensation was the complete lack of noise and splashing and speed once airborne - Quite unnerving.”

Notice the reference to "will take a bit" of practice?

Here's another master at work. Andrew McDougall, almost a boy by comparison, winning a race at round one of the KA Sail Victorian GP by thirteen minutes! It makes you think doesn't it? 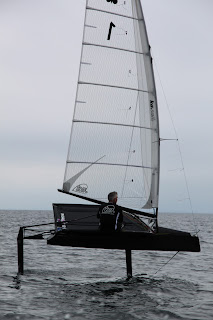 As Pete Barton said "4 of the top 5 British Moth sailors are in their late 40’s demonstrating that experience and technique far outweigh any requirement for a youthful body. So if there are any wannabe Moth sailors out there that are thinking that they might be too late to start and over the hill at 30 please take note; You might have over 50 years of Moth flying ahead of you – and reach your best after 20 years!"

Your own record there needs updating!

I think Stuart beats Pete by 5 months. Looks like the whole page needs updating, I was 45 when i won in Dubai in 2010.

In the defence of all the 20/30 something year olds sailing against Amac that 13 minutes was sailing at 1-2 knots of boat speed, drifting across the line. Who am I kidding old or not he smashed us...

Thats right Leigh, but his one off new boat has some pritty rad tweaks that our boats don't have, I don't think many people can foil in like 4-5 knots with small front and rear foils.

SOUNDS GOOD FOR ME. Keep current level of skill and age into a Championship ....